How much stuff do you have?

When its time to move people call up removal companies asking for a quote and here are some of the most common mistakes made by customers and make the removal guys job jut that little bit harder.

The common reply to the customer , Question – How much stuff do you have?

“A few” means more than one item but as little as two items so when we hear “ I’ve got a few boxes” its very difficult to work out what a few means, but in general it means not a lot so would be very easy to count and to say i have 6 boxes etc is much more informative (thats if you have 6 boxes) making it easy to work out whats being moved other than saying ‘I’ve a few things’.

Several.
“Several items of furniture” Is more than and few but less than many, all very confusing to anyone being told “I’ve got several boxes” but again several should be very easy to count and say i have 15 boxes or items of furniture sound much more appealing to the removal man. It all depends how you use the word, but it’s a lazy one to use for a removal quote and those values should register with the calling customer, shouldn’t it ?

Many.
“Many” can be used for high amounts of boxes or items , “I’ve got many items” or “I’ve not got that many” even  ‘its not than many” again its hard to pin point what many means so always handy to get some kind of figure on it so there is a standard set for expectations. Would you accept it’ll cost many pounds as a price?

One of the most commonly used words, what does “some stuff” mean, again, it doesn’t mean anything to a removal man on the other end of the phone trying to give you a price it can mean all of the above, you’ve got some stuff but some to you is many to others and little to few ?

“I have some things” well thats not exactly specific and remains unidentified so isn’t clear what “things” means and impossible to give a quote on that wouldn’t you think?

“Not much” 70% of man and van jobs this phrase is used in the first sentence, not much in comparison to what, please elaborate on what not much means!

“A couple”  a couple means two so it’s unlikely it’s actually a couple so why say couple when its more than 2!

“Very little” very little, its a well used phrase and can mean so many things , could it be for a 5 bedroomed home or a studio flat, very little for a family of 5?

“My things” Again things as in my things your things yes you’re moving things but ideally we are guided to a more accurate lists rather than things.

Number one odd phrase – Nothing really!

The best one of all is “Its nothing really” so you have called the mover and said its nothing really, thats quite a tough one to work out as would it cost nothing really to move nothing really. So you see the confusing vagueness and random thought creates. Remember the mover has no idea who you are, what you have or anything about you apart from a voice down the other end of a phone.

Does using any of the above help when asking for a quote if it isn’t clear we can’t be clear with you! 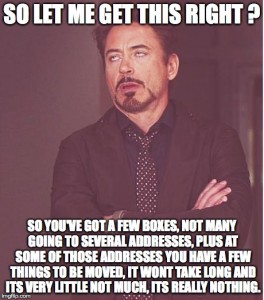 If you have some stuff to move not far around the corner or one place to another or nearby or less than a mile or locally give us a call  so we can work out what it is you want!