Booking a removals job of any size via a website called Anyvan is like the lottery, you place your job details that could be extremely vague as most are, missing out some vital info out that could affect the price and you get removal companies and man and vans bidding on it, Where could it POSSIBLY go wrong you ask?

Sometimes you win on it by getting items moved from lands end to john o’groats for £25, but in general you’ll need to be as accurate as possible to save any issues and please avoid calling up other movers via the normal channels and asking them to compare the anyvan price you may have got, that will more than likely be met with the dead phone tone after a few seconds.

Be prepared for disappointment with anyvan on the day of the move, why you ask? Well, you’re replying on someone you don’t know the company name of and its a low cost removal thats mostly reliant on other removal jobs the anyvan mover is doing that may be going near your area who’ve put vague information to get the lowest quote, like a chain, hence much cheapness. So if one of the removal guys jobs doesn’t go ahead it might not be worth him going to yours as that may well be the destination of the cancelled misinformation  job.

When using anyvan expect the unexpected – you get what you pay for !

ps if you’re let down by one of those jobs best not go onto the website and rubbish the guy as its not his fault – its yours. 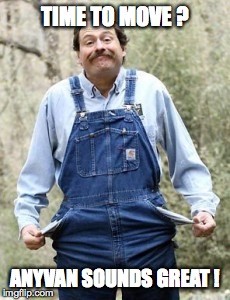 ← Moving home with organizing book library
How much stuff do you have? →